France municipal elections: what are the candidates' water commitments?

Following the second round of France's municipal elections on 28 June, we've analysed the commitments of candidates in five cities to identify whether or not water and sanitation is a political priority.

The five cities monitored are Bordeaux, Marseille, Montpellier, Paris, Toulouse. The analysis details the candidates' proposals related to water and sanitation (in France and internationally) to ascertain if they align with the five key measures proposed in the Manifes’eau of Coalition Eau's "Water is a Right!” campaign.

Nicolas Florian's party, Union pour Bordeaux, proposes to increase the number of public toilets in Bordeaux and to preserve water resources by installing rainwater recuperators. However, his programme does not mention the rights to water and sanitation and follows only one Manifest'eau recommendation.

Bordeaux Respire, the party led by Pierre Hurmic, includes many of Manifest'eau proposals in its programme. The party propose building new public water infrastructure that is accessible to vulnerable populations. Hurmic also promises to increase funding for decentralised water and sanitation projects. He should ensure all actors are included in decisions relating to water management.

The third candidate, Philippe Poutou, head of Bordeaux en lutte, has integrated the majority of the Manifest'eau's recommendations into his programme. He proposes allocating a set volume of free water to each inhabitant and creating accessible water points for people in precarious situations. To complement these measures, Bordeaux en lutte propose to install water and sanitation infrastructure in urban areas that are free to use. Funding for decentralised solidarity must also be increased to address water and sanitation challenges at international level. 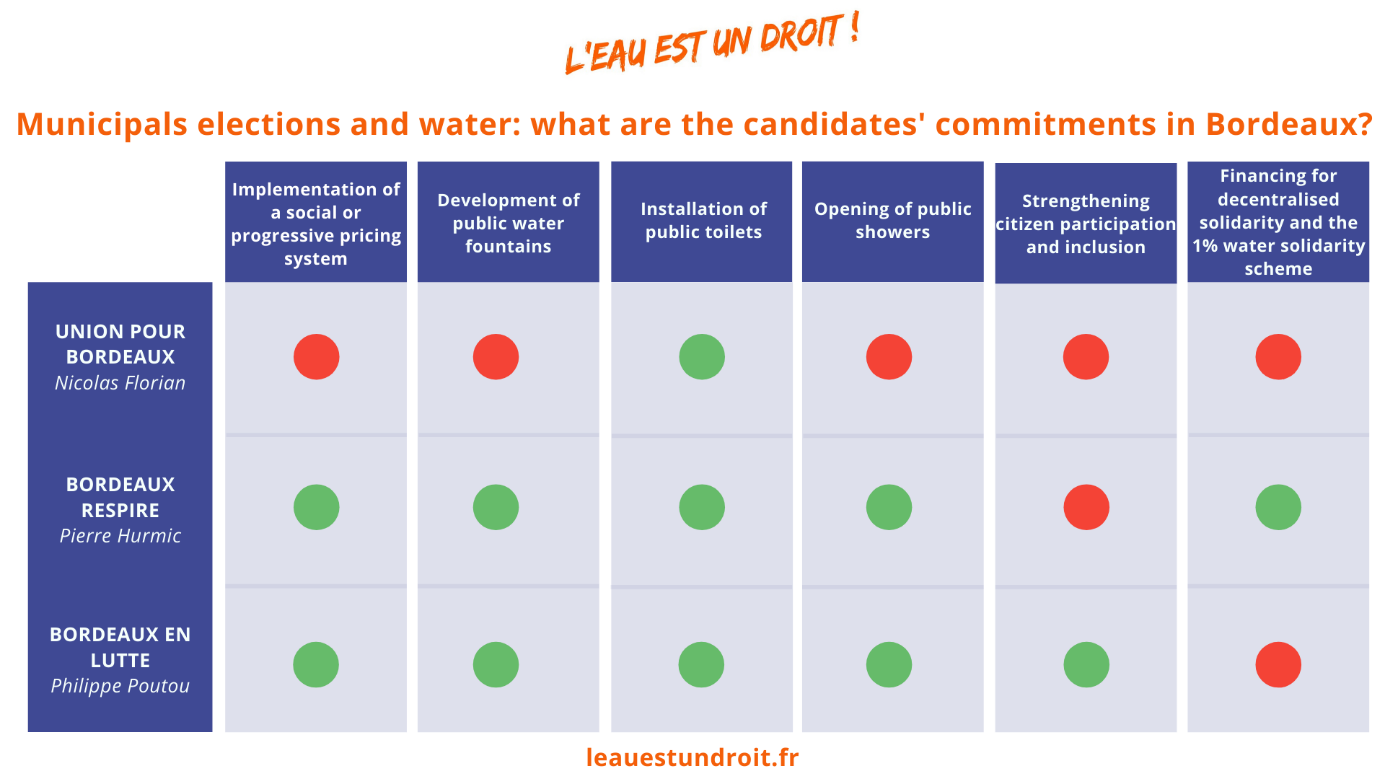 Bruno Gilles, Marseille's mayoral candidate and leader of Ensemble pour Marseille, has not included any commitment to the rights to water and sanitation in his programme.

Michèle Rubirola has integrated many proposals for improving access to water and sanitation in Marseille. Printemps Marseillais' proposals are varied, from the social pricing of water, to climate commitments and access to water for all. Nevertheless, decentralised cooperation must be integrated into these proposals via the 1% water solidarity scheme.

Martine Vassal, Une volonté pour Marseille's candidate, proposes to build public fountains and public toilets. However, her proposal concerning the installation of public showers accessible to people with reduced mobility, at the beach or in gymnasiums, does not fully correspond to the recommendation of the Manifest'eau. In order to achieve the Manifest'eau's objectives, more free public showers should be installed in Marseille. Une volonté pour Marseille should propose solutions related to water affordability, and funding for international solidarity. The strengthening of civic participation and inclusion in the management of the public water service must also be considered. 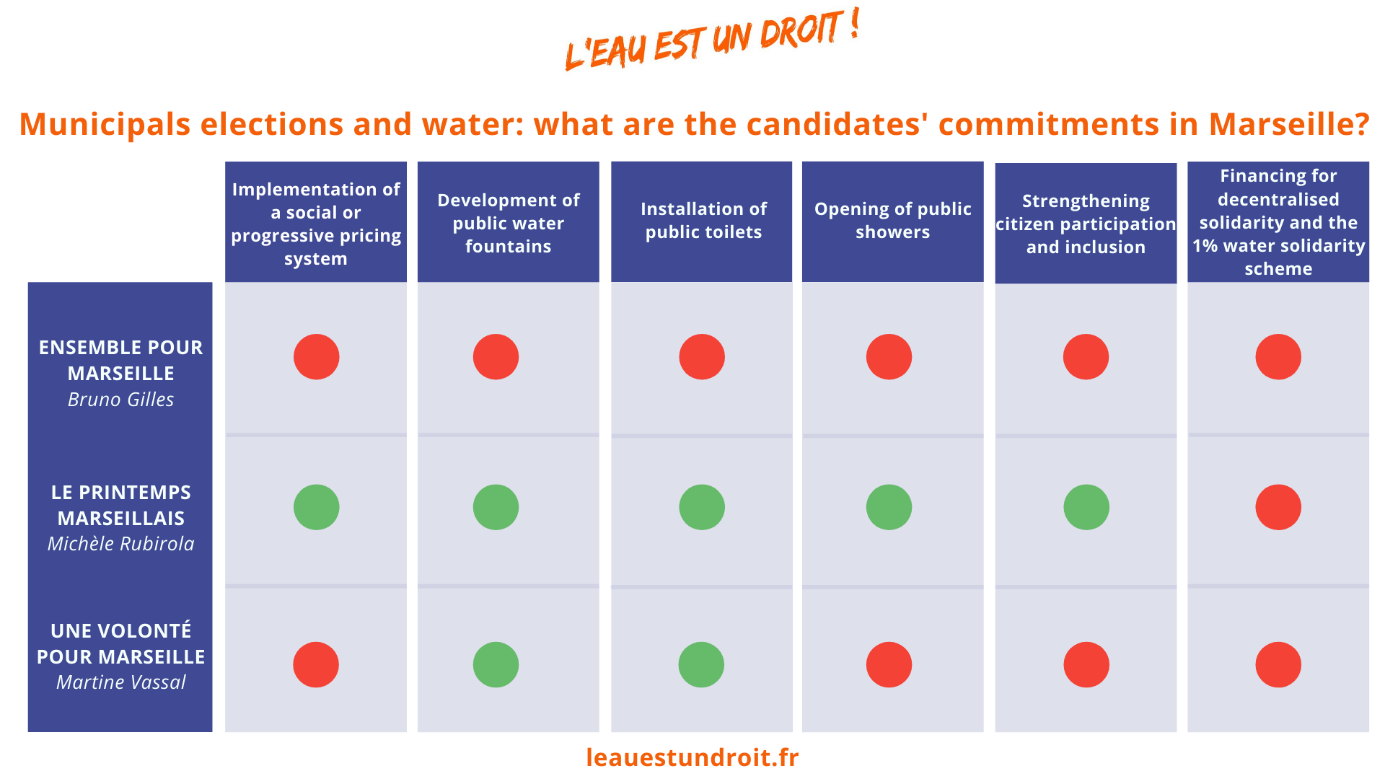 Le Coeur et l'Action's Mohed Altrad proposes to lower the price of water by 15-20%. This is a step in the right direction towards making drinking water affordable. Altrad should add to his programme proposals concerning the opening of public toilets and showers.

Montpellier Unie, led by Michaël Delafosse, proposes to introduce three cubic metres of water free of charge and to 'de-waterproof' the soil to allow rainwater infiltration. These proposals are not sufficient for Montpellier's situation. Other measures can be integrated into the programme to improve the Montpellier people's quality of life.

Philippe Saurel, mayor of Montpellier and candidate for re-election with Montpellier la Citoyenne, proposes similar measures to Michaël Delafosse in terms of social water pricing and soil dewatering. He is yet to integrate several Manifest'eau recommendations into this programme. 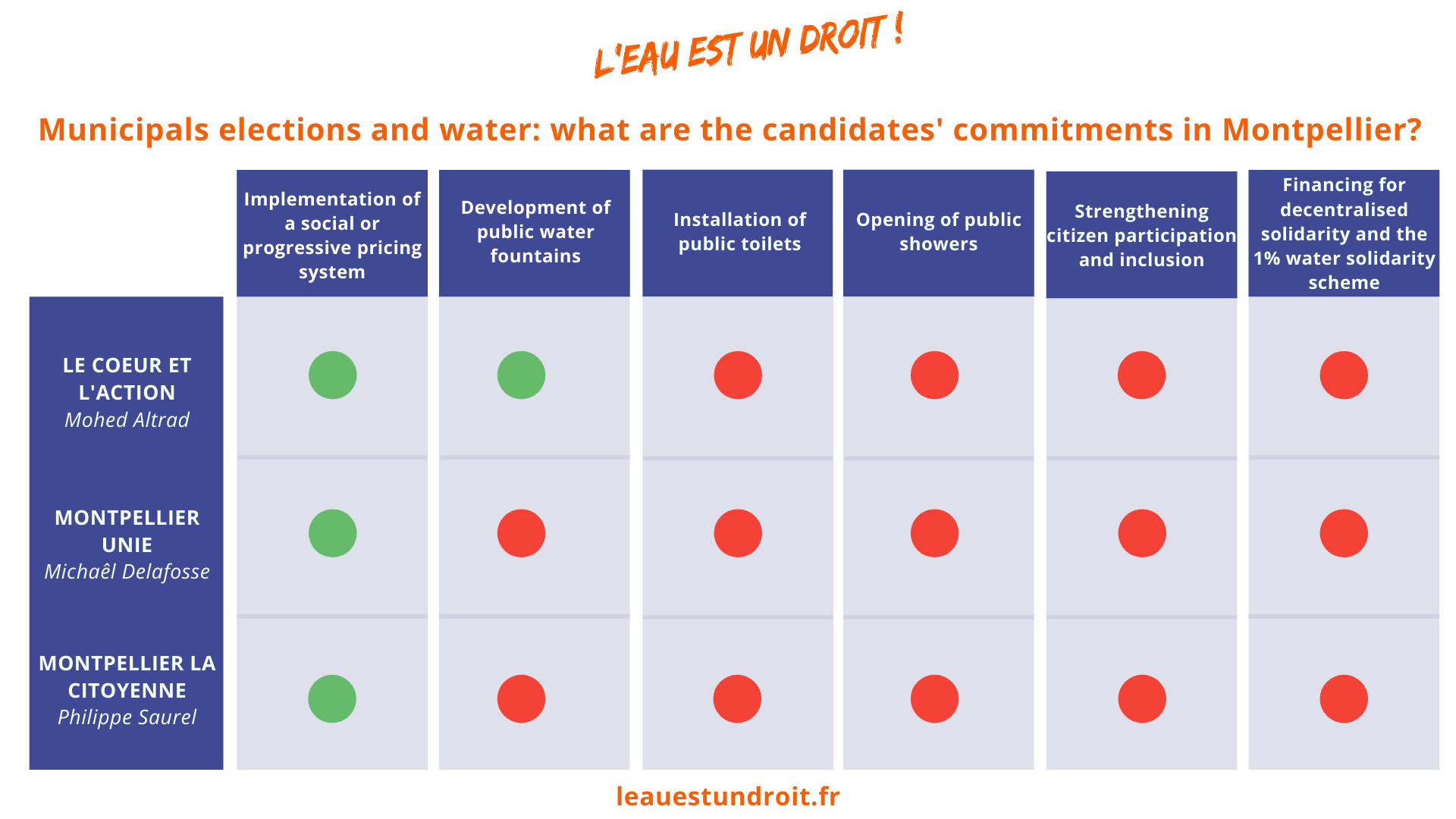 The programme of Agnès Buzyn, leading candidate for Ensemble pour Paris, includes only one proposal concerning access to water. Creating water screens in public places is essential to addressing environmental challenges. Buzyn should complement this measure with public water and sanitation facilities to meet the needs of people living in Paris without permanent access to water and sanitation.

Rachida Dati makes no mention of water or sanitation in her programme.

Anne Hidalgo, candidate of the Paris en Commun and l'Ecologie pour Paris merger, proposes a number of urban developments such as creating water points and public fountains. Hidalgo also promises to bring back green spaces. Her programme needs to flesh out proposals relating to free public water services. She should also go further in terms of social water pricing. We recommend she strengthens the participation and inclusion of citizens in water management and increase funding for international water and sanitation services. 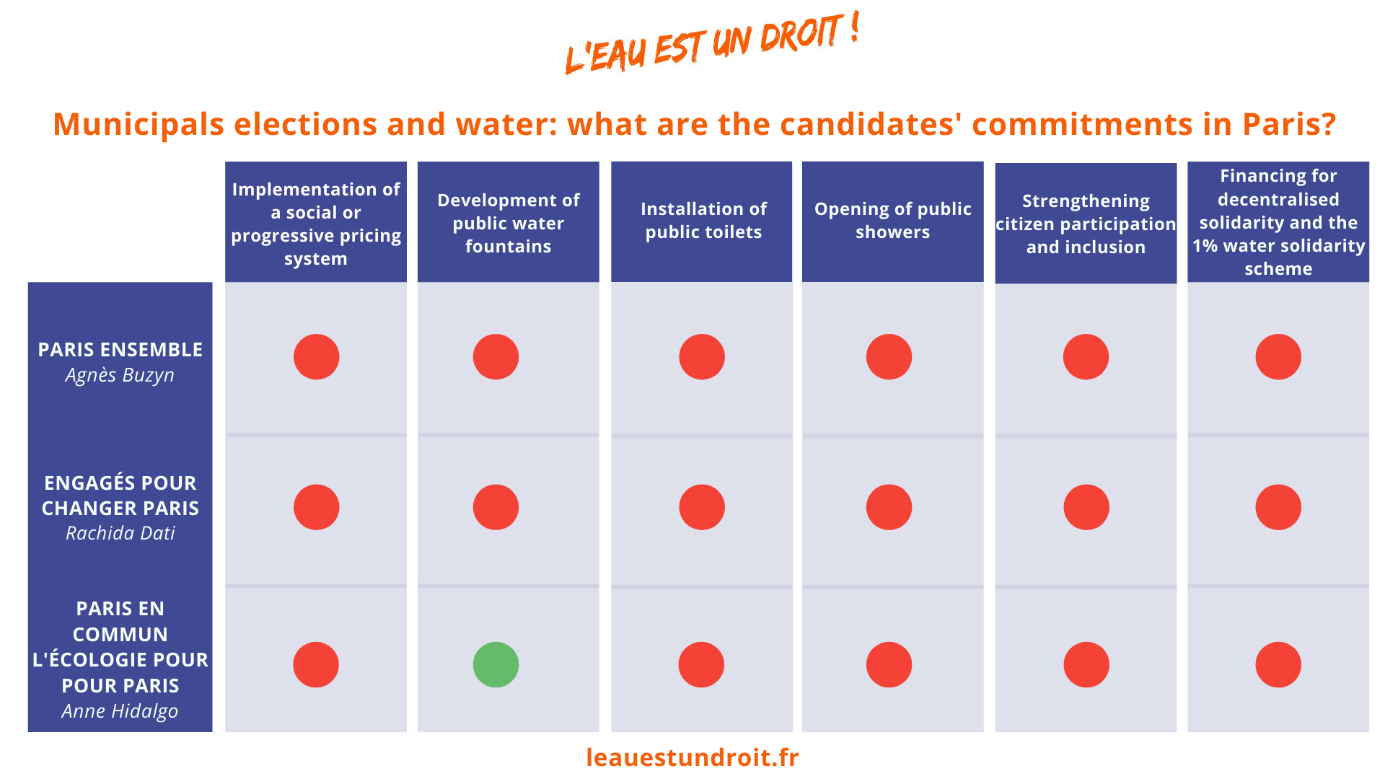 Jean-Luc Moudenc, mayor of Toulouse and Aimer Toulouse's candidate for re-election, does not mention water and sanitation in his programme.

Antoine Maurice, head of Archipel Citoyen, offers many policies concerning access to water in his programme. We advise him to encourage civic participation for transparent water management. Finally, though funding for decentralised cooperation is part of Antoine Maurice's programme, he should also commit to decentralised solidarity projects for water and sanitation. 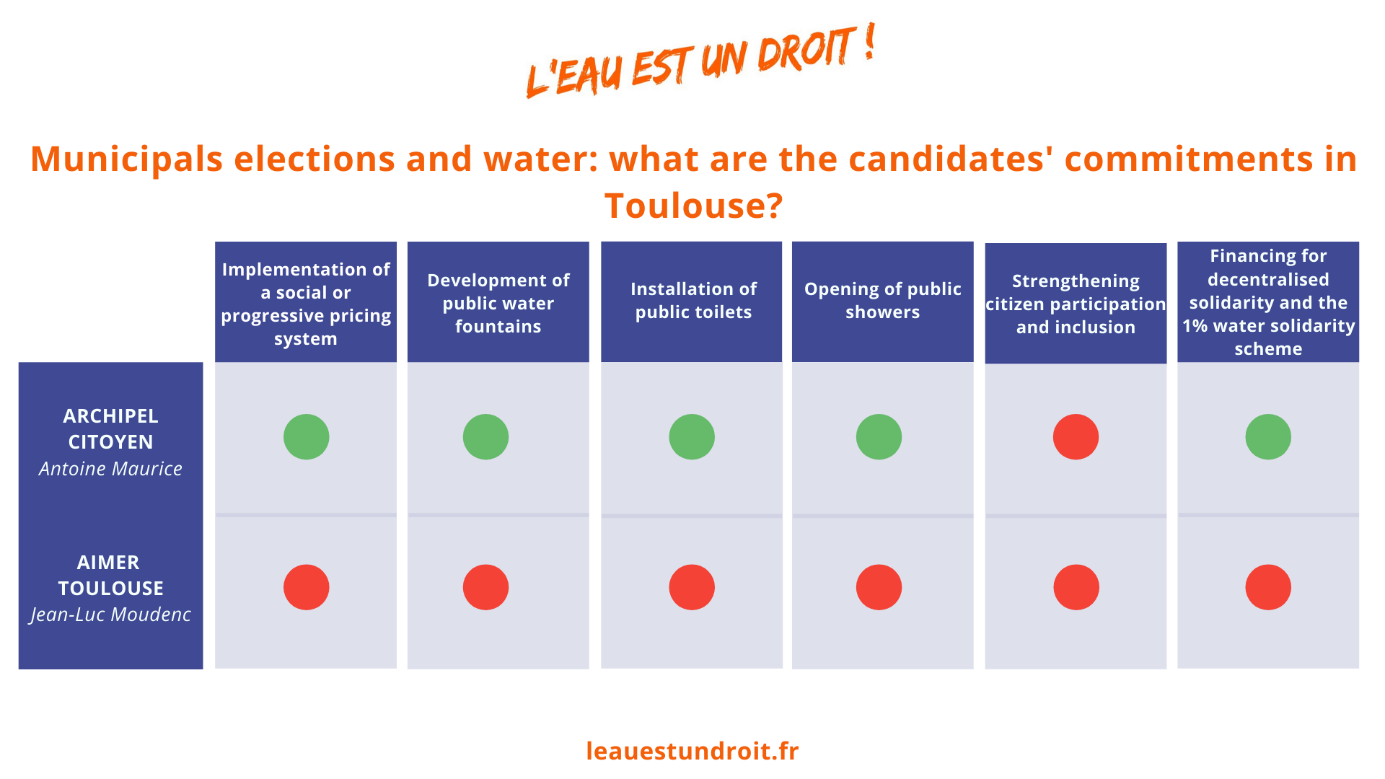