This time last year, End Water Poverty brought the misreporting on the Sustainable Development Goals (SDGs) progress levels using incorrect datasets to the attention of the UN Secretary General. The progress report that was flagged by the coalition had used indicators from the Millennium Development Goals instead of the SDGs, thereby not tracking progress accurately. End Water Poverty was later informed that this was due to lack of data and that it would be rectified in subsequent years.

It is encouraging to see that prior to and during the 2018 High Level Political Forum (HLPF), UN agencies along with the UN General Assembly President, Miroslav Lajčák recognised the importance of access to safely managed water and sanitation and used the human rights language within their official communications.

The voluntary national review reports submitted by members raise a number of challenges. Some of them are still not reporting based on the criteria or indicators for the SDGs. For example, for Goal 6 countries are expected to report on the following:

Bhutan reported that 71% of its population have access to improved sanitation. This kind of reporting is either due to a lack of understanding of the indicators or intentionally gaming the system. There are three categories of services, which fall under ‘improved’ services. This includes limited, basic and safely managed services. These three categorisation are not one and the same. See below the interpretation of these three categories as outlined by WHO-UNICEF Joint Monitoring Programme. 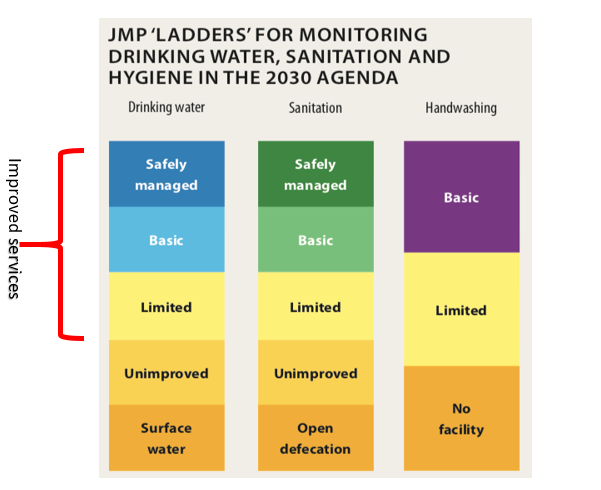 The State of Palestine reports that 91% of communities are connected to public piped water networks. Note that they did not say safely managed water services. Their report goes further to assert that “irregular water supply and intermittent access to piped water is widespread in both West Bank and Gaza. As such, many Palestinians survive with less than the World Health Organisation recommended water consumption guidelines of 120 litres per day per person”.  They also reported that the water is not safe due to the inefficiencies of desalination plants used for treating sea water into drinking water. Since the services are not regular and available and have some levels of chemicals, the government categorically stated that the water is not safe. This is honest reporting and should be encouraged.

These two countries are just the tip of the iceberg as they abide by the correct reporting framework and deliver high quality reporting. It seems as though some countries are either not aware of the Joint Monitoring Programme’s (JMP) simplified framework of reporting or they are avoiding it to report in a way that helps avoid adequate accountability.

It is important to report on the right indicators in order to capture the quality of services that governments are providing. The differences between limited and safely managed services are poles apart. When classified as 'limited water services', the water is not free from contamination with faecal matter and hazardous chemicals, and it is not available when needed nor is it located on the premises. On the other hand, 'safely managed water services' means available whenever required, located on premises and free from faecal and chemical contamination. Unless a distinction is clearly made in reports, these two radically different services could be lumped together as improved services.

Going forward, End Water Poverty recommends that all major stakeholders – especially UN agencies such as UN Water, UNICEF, WHO and regional economic forums leading the SDG consultations – actively promote the use of the Joint Monitoring Programme reporting framework for SDG 6. This appeal also goes to local and international NGOs, think tanks, trade unions, and professional bodies to encourage and support governments in using this framework for reporting.