The Syrian conflict has displaced 1.5 million people to Lebanon, putting pressure on water services and resources. Humanitarian agencies and the national government have drawn on SDG indicators to gather new data on access to water and water quality, to be able to respond more effectively to the water crisis.

The Syrian conflict has led to a humanitarian crisis that has displaced 11 million people in the Middle East and North Africa since 2011. This has had huge ramifications for the provision of basic services, such as electricity, sanitation, waste collection and water in surrounding countries, including Lebanon.

UN-Habitat estimates that demand on water services has increased by 30% since the crisis began. 3.7 million people – both Lebanese and Syrian are in need of water.

However, the water crisis affecting Lebanon predates the arrival of the Syrian refugees. Decades of civil unrest and under-investment, followed by episodes of conflict driven by regional and sectarian tensions, have splintered towns and cities, damaging the country's existing water infrastructure that delivers water to towns, cities and households. Although Lebanon is rich in water compared to Jordan, Israel and Syria, the amount of renewable water in the region has dropped from 1,000 cubic metres a year per person – considered the threshold of water poverty – to around 700m3 per person since the refugees arrived.

Humanitarian agencies, national government and water utilities have been working to respond to the infrastructural and water resource challenges that underpin the crisis. This has included upgrading infrastructure for water service and wastewater treatment plants. A lack of reliable data on access to water and water quality has challenged planning and decision making in relation to the ongoing water crisis since 2011. However, the Joint Monitoring Programme has recently published updated SDG data on water provision in Lebanon as a result of cooperation between humanitarian agencies like UNICEF and the national government.  UNICEF partners with the World Health Organisation for the Joint Monitoring Programme to track the Sustainable Development Goal 6 ― to ensure access to water and sanitation for all ― globally.

Disaggregated demographic data is essential for understanding who lives where in each city, and more importantly their basic needs, such as access to water. Equally, it has the scope to disrupt fragile social relations, as demonstrated by the reluctance of the Lebanese government to undertake a census since 1932, given the extended periods of civil war and unrest.

MDG data was aggregated to the national level, so it is not detailed enough to be useful for local planning. Some of the emerging SDG 6 indicators provide opportunities to develop localised data sets on water quality in cities, informal settlements and refugee camps. Furthermore, the extended presence of UNICEF as a support institution to the Ministry of Energy and Water (MoEW) in Lebanon has presented opportunities to collect data on water resources and quality that could inform decisions taken on investment and water management.

In Lebanon, UNICEF has been working with the MoEW to collect and support data collection on access to water linked to the new SDG indicator on quality. With more detailed data sets on water access and quality, the MoEW could work with water utilities in Lebanon and agencies seeking to support the sector to make more targeted investments in water storage, irrigation programmes and wastewater treatment. 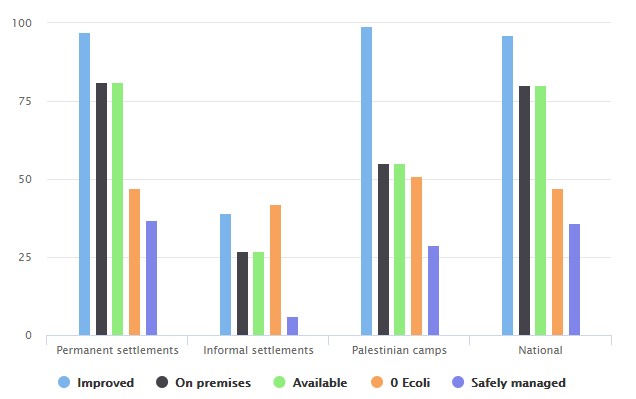 Percentage of population in Lebanon using safely managed water disaggregated by settlement (baseline for SDG 6.1 at a national level for Lebanon). The results clearly demonstrate that although Lebanon has a high proportion (96%) of households accessing an improved water supply (except IS’s), and that supply is generally accessible (80%) and available (95%), the high faecal contamination levels (47%) make the water unsafe to drink and therefore compromise accessibility to safely managed drinking water supply. - WHO/UNICEF (2016), Joint Monitoring Program Lebanon water quality survey.

The SDGs have brought more detailed indicators for agencies and government, enabling them to analyse water quality with some degree of accuracy. Although MDG reporting suggested that 97.7 per cent of people in Lebanon had access to an improved water source, recent data collection by the WHO-UNICEF Joint Monitoring Programme for Water Supply and Sanitation has revealed domestic water supply being far below water drinking standards, particularly in informal refugee settlements.

Meanwhile, given that water scarcity in Lebanon is largely due to institutional and infrastructural challenges, improved data on water resources, potential groundwater recharge points, and the impact of inadequate wastewater treatment could facilitate more strategic investment by donors looking to invest in infrastructural projects within the water sector.

I'm anthropologist who specialises in inclusive urbanisation and basic service provision across the global South. Over the last ten years I have supported the work of civil society organisations and undertaken extensive participatory research and in East Africa, the Andes, and most recently Lebanon. My research has focused on the practical and strategic approaches that low- income communities and local governments have developed with development agencies to improve access to basic services and forge more inclusive and equitable processes of urbanisation in rapidly growing informal urban settlements. I currently lead the work on water and sanitation in the Human Settlements Group at IIED. https://www.iied.org/users/anna-walnycki