Civil society organisations (CSOs) play a key role in ensuring no one is left behind as we strive to achieve Sustainable Development Goals (SDGs). But what are the benefits, opportunities, and challenges that CSOs face as they work with governments and other actors to deliver the SDG targets on water and sanitation? Who exactly do we mean when speaking about CSOs? How are we using the term ‘CSO’? Who are CSOs speaking on behalf of? What is their mandate? What is the role of CSOs in accountability? These key questions brought together several CSOs and key government representatives for a session on accountability at the 2019 World Water Week in Stockholm. 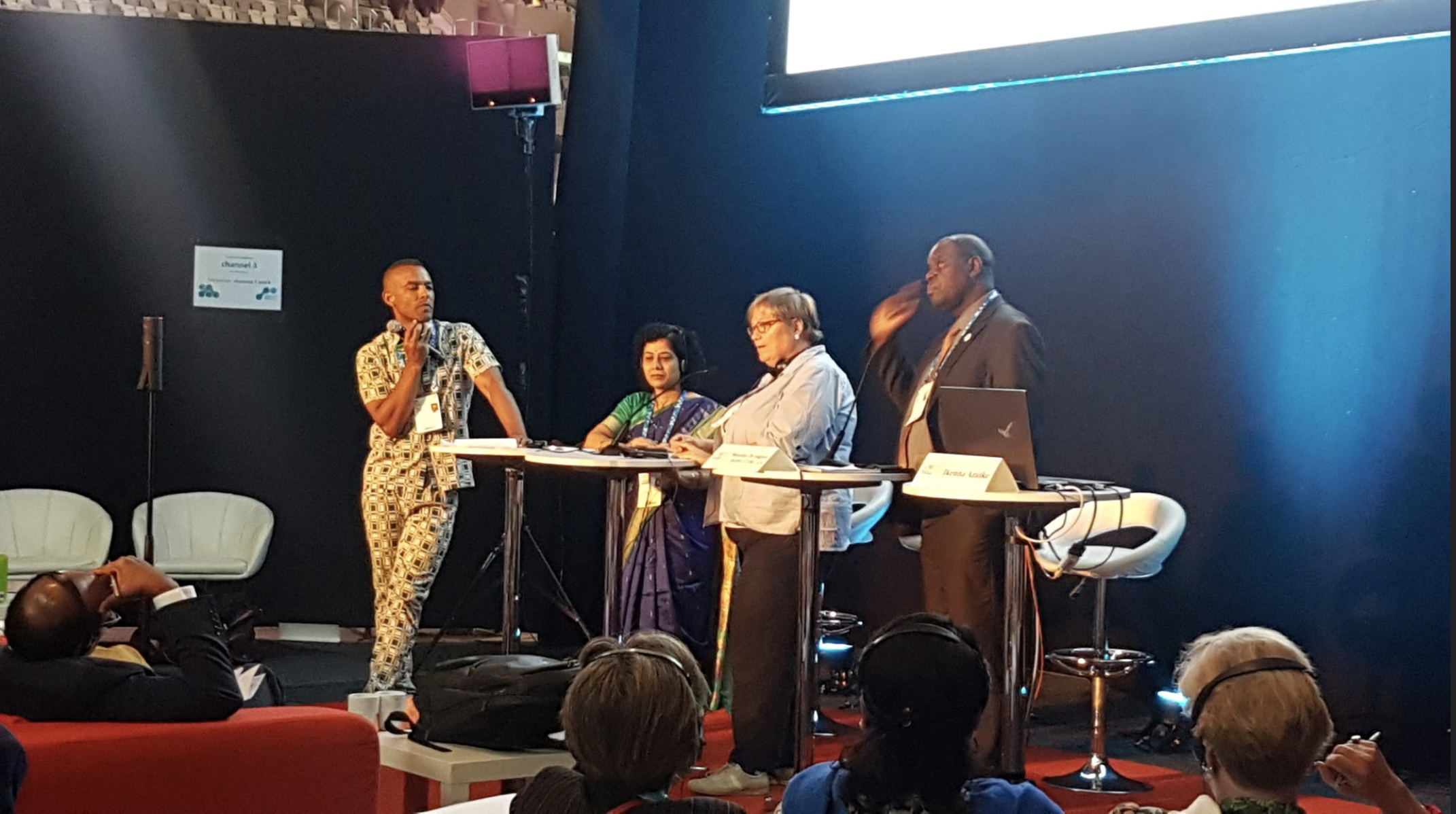 Setting the scene for the session, Patrick Moriarty from IRC WASH defined CSOs as “organised civil society that can come in many forms, some informal and some as formal entities such as non-governmental organisations (NGOs), community-based organisations (CBOs), faith-based organisations (FBOs), among many others. This is when a group of individuals come together for a common purpose, as in to fulfill a particular mandate driven by a particular need.”

These organisations bring out the voices of the most marginalised to policy circles, stressed Snehalatha Malaka from civil society network Freshwater Action Network South Asia. Referring to the outcomes of the Global Study on National Accountability Mechanisms for SDG6, Snehalatha said: “Almost all CSOs and government officials in the 25 partaking countries agreed that participation in accountability mechanisms for SDG6 have a positive impact when carried out in an effective, meaningful way… We know WASH [water, sanitation and hygiene] is inherently a multi-stakeholder sector and when CSO voices are strong and present, governments perform better.” When asked about the direct example of how FANSA won government support, Snehalatha explained that South Asian CSOs organised a plenary session at the 7th South Asian Conference on Sanitation (SACOSAN VII) to give voices to the most marginalised (such as transgender people and people with disabilities). Governments subsequently committed to allocate budgets to leave no one behind.

Should CSOs keep an independent position to hold Government accountable?

Aradhana Patnaik, principal secretary of water & sanitation in the Indian State of Jharkhand, stressing the need for increased collaboration between government bodies and CSOs. Patnaik quoted the success of Swachh Bharat Mission (Clean India Mission): "This is truly a people's movement, based on four pillars - political will and leadership, public funding, partnerships (with CSOs and INGOs) and people’s participation." Meanwhile Brechtje Paardekoper, senior policy advisor in the Dutch Ministry of Foreign Affairs, made a strong case for dissent in civic space: "Around the world, it's alarming that the voices of CSOs are being regulated and silenced - the civic space is shrinking. Many WASH CSOs have a tendency to want to sit at the table. I believe, in order to be listened to they need to be also ready to leave the table."

“A CSO is governed by its mission and vision, and that’s how CSOs are independent. However, the key role of CSOs is to hold governments accountable,” said Patrick Alubbe, Executive Director of Kenya Water for Health Organisation (KWAHO). Asked how governments can ensure a seat at the table for those left behind, Patrick responded, “Governments have the responsibility to create an enabling environment, in terms of policy, participation and regulations. It is also crucial to monitor the work of all actors, including CSOs, in the sector.”

How are CSOs contributing to national policy priorities and targets in the WASH sector?

1. CSOs as service providers: Ramisetti Murali, executive director of MARI, a CSO working with grassroots level organisations in Hyderabad, India, shared an interesting perspective from Krishna district where household level toilet accessibility for 8510 families belonging to the poorest and marginalised communities was ensured. “These people were initially left out in the efforts to push Open Defecation Free (ODF) progress in the district under the government's Swach Bharath Mission. Disadvantaged and vulnerable households could not take advantage of government supported programme because the poorest families do not have the means to pre-finance construction of the toilets as the financial incentive would only be available once the family could prove the conclusion of the construction. Also, disabled, elderly and sick people needed help to construct the toilets. MARI engaged five local CSOs to carry out a rapid assessment in 33 clusters to identify the left out families. Tata Trusts provided a revolving fund to advance the construction of toilets for the poor. MARI built the technical and community mobilisation capacities of CSOs and supported them to work with village-level local bodies to promote toilet construction and usage. By getting household level toilet accessibility for this last mile segment, a significant contribution was made to the Krishna district in attaining an Open Defecation Free status.”

3. Advocating for increased Budgetary allocation for WASH: Herbert Kashililah, chair of Shahidi wa Maji,Tanzania, shared his experience of how his organisation is working with national and development partners to improve the national regulation that resulted in an enhanced national budget for the water sector and improved access to water resources for vulnerable groups. “We provided the evidence by commissioning a budget analysis (2014-2018) that provided insight into the total budget for water resources management and how budgets are planned, allocated and spent within the National Directorate of Water Resources and its nine Basin Water Boards. We engage in national dialogue - such as the Joint Sector Review - and in technical working groups where we advocate for a fair share of water resources for the most marginalised groups such as the pastoralists.”

In conclusion, Erma Uytewaal (IRC) said that the cases presented during the session provide examples of how CSOs are building and cultivating relations for successful collaboration with their respective governments in order to leave no one behind. She added: “For leaving not one behind in the WASH sector, CSOs also need to create more space for dissent. CSOs could become more effective by seeking collaboration with organisations and networks with a strong track-record in advocacy, campaigning and lobbying beyond the WASH sector.” This session helped to highlight the key role of CSO organisations in: