Young people take the lead in advancing the right to water: a look at the #ClaimYourWaterRights campaign in Zimbabwe

As the water crisis continues to deepen in Zimbabwe, young people are demanding their human rights through NAYO's #ClaimYourWaterRights Campaign.

The National Association of Youth Organisations (NAYO) is an umbrella body working in all of Zimbabwe’s ten provinces. Our role is to coordinate youth organisations to influence government policy by strengthening their capacity to lobby for meaningful youth participation around respecting fundamental human rights like safe water and sanitation.

The water crisis in Zimbabwe disproportionately affects women, children and young people. Only 64% of schools in Zimbabwe have access to basic water. Children regularly miss school to search for water, while gender-based violence at community boreholes has risen due to lack of water in communities and poor management of the few available water sources. Yet Zimbabwean authorities remain hesitant to declare a national disaster. This is despite the right to water being enshrined in Section 77 a) of Zimbabwe’s Constitution, which states that “every person has the right to safe, clean and potable water.”

Our campaign seeks to close the ever-widening gaps in access to and availability of safe, clean and potable water. In Zimbabwe, the #ClaimYourWaterRights campaign is driven by youth (people aged 15–35), who constitute 67% of the population. Over the past few months we held a number of Twitter and Facebook live sessions to raise awareness of people’s rights to water; on 14 January #ClaimYourWaterRights was among the top five trending hashtags on Zimbabwean Twitter. 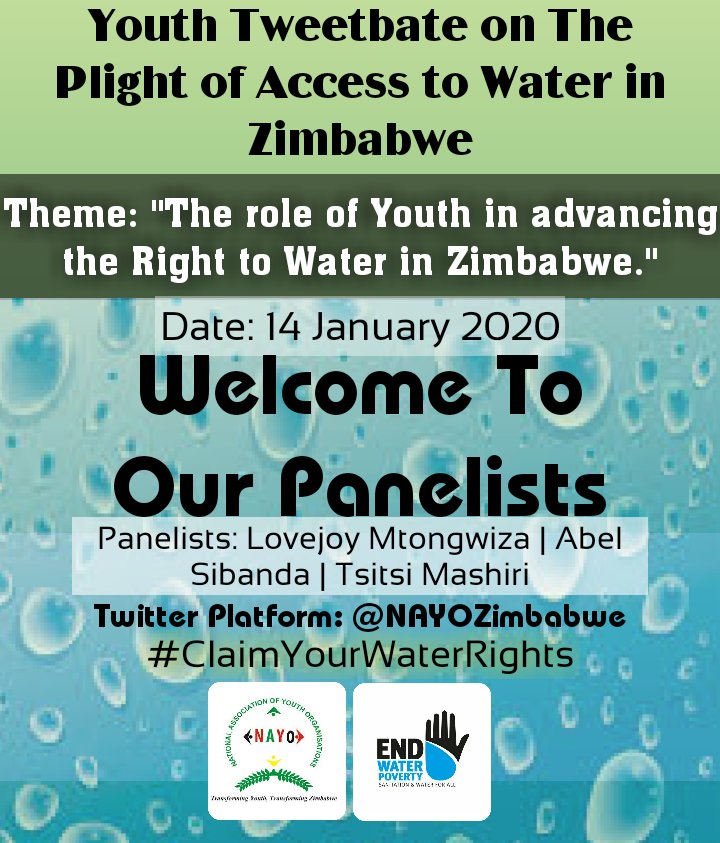 To voice their concerns, in February the youth presented a petition to the Zimbabwean Parliament imploring authorities to respect the right to water that the Constitution guarantees to all citizens. The petition also cites the need to prioritise access to safe, clean and potable water for the women, children and young people who are suffering the most. The petition urged the government to:

As well contravening Zimbabwe’s national law, the unavailability of water is a gross human rights violation. As the youth representative on the Zimbabwe Human Rights Commission (ZHRC), we have submitted complaints relating to the denial of young people’s access to safe water and sanitation within schools and at household level. The complaints implore the commission to protect the rights of marginalized and vulnerable people in the midst of the water crisis - particularly the rights of women, youth and children. They highlight how the violation of this right adversely affects other rights such as education and health. Once the commission has investigated the complaints, we hope they will publish recommendations that the government will adhere to.

As the campaign gains momentum, various youth actors have started to engage with local authorities outside the capital of Harare. Several complaints have been submitted in Chitungwiza; Kadoma urban and Marondera urban. The complaints call for local authorities to urgently:

It is no longer business as usual. At the heart of the campaign is a growing movement of youth actors who are keen to advance the right to water in Zimbabwe. Their actions are spreading like veldfire with young people making use of social media to spotlight a crisis that threatens the enjoyment of the Zimbabwe people’s human and constitutional rights.