The Zimbabwe water crisis has turned into a national disaster. The government - from local to national level - has failed to honour its obligations to protect, respect and fulfil the human right to water, exposing citizens to water-borne diseases such as cholera.

Millions of lives are at risk; most local authorities have proposed and implemented water rationing. The recent shutdown of Morton Jaffray Plant, which supplies the capital Harare with water, is a clear sign of a looming national crisis. The Harare City Council cited a lack of foreign currency to purchase chemicals for water treatment and low water levels at Lake Chivero as reasons for the plant’s closure. Dwindling water levels in dams and other water bodies are mainly due to drought, siltation, high water pollution, poor catchment management, wetlands invasion, and depletion.

Water is a fundamental human right that must be easy to access. Sustainable Development Goal 6 specifically outlines citizens’ right to safe water and sanitation, and Zimbabwe has committed to realising the SDGs by 2030. However, water is a scarce resource in Zimbabwe. The unavailability of water has a significant bearing on the economy as water has huge economic value. For instance, as noted in the Zimbabwe National Water Policy (2012), water plays a critical role in electricity generation.

The drought has led to the widespread unavailability of water in both urban and rural communities. In most urban areas, local authorities opted for the sinking of boreholes. However, in other areas people are resorting to unsafe, unprotected water sources such as shallow wells. The need to ensure water resources are sustainable, equally distributed and well managed remains critical. Although the drought affects all Zimbabweans, it hits women and children hardest. The water crisis brings into the spotlight the plight of women, who play a central role in providing, managing and safeguarding their family’s water for drinking, cooking, sanitation, and hygiene, among other uses. 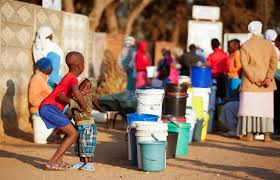 According to WHO/UNICEF, access to adequate sanitation in Zimbabwe lags at 36% whilst access to clean, safe water remains a challenge in rural and urban areas. The situation is devastating as women are forced to spend a lot of time fetching and queuing for water. This increases the burden of unpaid care work for women, affecting their mental health.

Guided by Section 77 (a) of the Zimbabwe Constitution (2013), which notes that every person has the right to safe, clean and potable water, we need an urgent and holistic approach to solving the water crisis. We recommend that: