We recently chatted with EWP member, Benjamin Arthur who will be attending the upcoming AfricaSan event in Dakar, Senegal, representing his organisation the Coalition of NGOs in Water and Sanitation (CONIWAS) of Ghana to learn of his activities and intentions for the conference.

Poor hygiene and lack of access to safe sanitation and large-scale open defecation continues to underlie major health problems, undermines economic growth, pollutes the environment, prevents girls from school attendance and traps Africans in poverty. Since 2008 AfricaSan has been associated with establishing and tracking progress towards achieving the eThekwini commitments. AfricaSan has also features a growing and high-level learning exchange on different aspects of sanitation and hygiene service improvement.[1]

Benjamin and CONIWAS hopes to use the upcoming event to strongly advocate for persons without access to improved water, sanitation and hygiene (WASH) services across the continent, as this is a critical issue that has been neglected and is having very negative consequences. At the previous AfricaSan event in Kigali, he co-facilitated the civil society organisations (CSO) session which ended in developing important CSO inputs into the recommendation and closing statements, which was a great success in amplifying civil society’s voice and being recognised. He is very much looking forward to participating in AfricaSan, and particularly in attending the EWP session on Monday 25 May, in the hope to yet again achieve success in raising civil society’s profile and having our call for action heard.

The one key message that Benjamin will be prioritising at the conference will be for countries to implement the outcomes developed to their fullest, and thus fulfil their obligations to realise the human right to water and sanitation. This will be the core message he will be calling for, to hold governments accountable.

As to next steps following the event, Benjamin feels that it will be very important for CSOs to work together to strengthen their capacity, particularly in terms of their important role to monitor governments and ensure that they implement and act on the commitments and agreements developed at AfricaSan. CONIWAS and other CSOs will need to have a united front to enhance the pace of advocacy in all the participating countries, to make sure governments take up action to realise their commitments. This is of critical importance for CONIWAS and they will be focusing on monitoring and reporting on the implementation of the outcomes. To ensure that awareness is raised on these important issues, the organisation will work with their members and network, along with other partners, including Ghanaian journalists networks to ensure that the general public is aware and active in holding governments accountable to their people and the commitments they make to ensuring the right to water and sanitation is a reality for everyone. 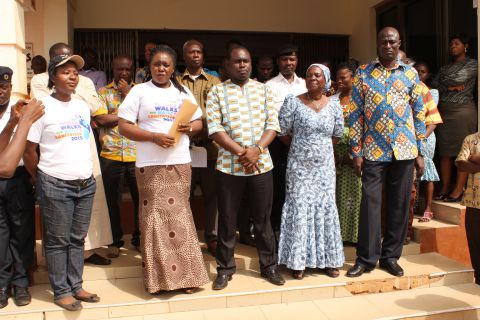 The Coalition of NGOs in Water and Sanitation (CONIWAS) of Ghana is a non-governmental organisation working in partnership with sector players to influence policies, remove barriers and promote access to portable water, sanitation and improved hygiene for the poor and vulnerable. Read more on their blog.