There truly is strength in numbers!

Before joining End Water Poverty, I had never worked for a coalition and I have to admit, I was a little sceptical about just how effective they could be. I had heard too many stories about coalitions that were unable to act or move forward because they could not agree on a message or the best course of action.

Thankfully, and wonderfully, EWP disproved all my fears. During my time in the secretariat, I experienced a coalition where members truly care and are passionate about the coalition, its work and how it runs. Our members are at the heart of the coalition and shape our work and actions. At last year’s annual planning meeting, members passionately debated and agreed that the focus of our campaign had to be the human right to water and sanitation. This was because such a focus would make our advocacy asks stronger and would prioritise the communities who are most in need of water and sanitation – the poor and the marginalised. 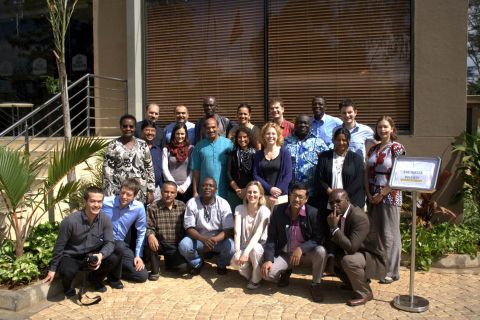 We have seen our campaign, Keep Your Promises, come to life through our members’ hard work implementing it nationally, with great success. Some examples of this include:

· WASH Net in Sierra Leone successfully campaigned for the establishment of a Parliamentary Action Group on WASH for Sustainable Development. This Action Group comprises of 124 Members of Parliament and headed by the Water Resources Committee Chair, Hon. Sualuho M. Koroma. This was part of their rapid response on Ebola, with their ultimate goal to have WASH included as a human right in the reviewed constitution.

· In India, our member Freshwater Action Network- South Asia (FANSA) have trained over 300 local communities leaders on the human right to water and sanitation. This work was done to ensure that the newly launched National Sanitation Programme realises the right to sanitation for the poor and marginalised in the country.

When speaking with members, they have regularly told me that one of the benefits of being in a global coalition is the opportunity to be part of something bigger – a coalition, which brings civil society together, is much harder for governments to ignore. We have our strength in our united messages and advocacy.

And EWP definitely has impact due to its numbers. Such fantastic work! This year, our members have led our work on the Sustainable Development Goals – agreeing messaging, developing position papers and engaging and influencing key stakeholders. Our last global petition gained over 1 million signatures! We handed this powerful document in to numerous governments and the co-chairs of the UN SDG Open Working Group – resulting in governments hearing loud and clear that there must be a dedicated goal on water and sanitation. Incredibly, this is set to become a reality this September. 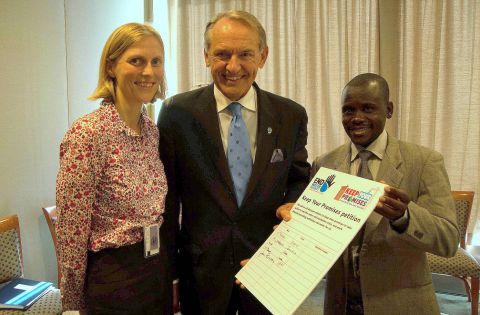 On World Water Day this year, over 455 000 people across 35 countries joined our World Walks for Water and Sanitation event. EWP members held walks, meetings with Ministers and press conferences, all to ensure that governments hear our demands and take real action to end the water and sanitation crisis. Successes were evident all around the world. For example, in Mexico, FAN-MEX took to the streets to hold the Mexican government to account for legislating in a manner contrary to the principles of human rights and ignoring international agreements. And in Pakistan, members in Khairpur demanded the immediate preparation of provincial safe drinking water and sanitation policies, following previous delays. Elsewhere, politicians were encouraged to include water and sanitation issues in their manifestos before the May provincial elections. Locals were also encouraged to vote with WASH concerns in mind.

These are just a few examples of the incredible, hard work that our members have achieved over the years, always working to improve the lives of those most in need, and acting on behalf of those who cannot speak for themselves. It has been such a great pleasure to be a small part of this fantastic and effective coalition. While I am sad to be moving on, I have no doubt that, because of our members, EWP will continue to have a strong and successful future. I wish you all the best -carry on with a united voice, calling for a better future for all!

Blog written by Esmee Russell, International Coalition Coordinator on her leaving EWP at the end of July 2015. EWP wishes Esmee all the best on her new adventures and thank her for all the incredible work that she has done to develop and strenghten EWP over the years. Bon voyage!