The World Walks for Water and Sanitation 2015: In the media 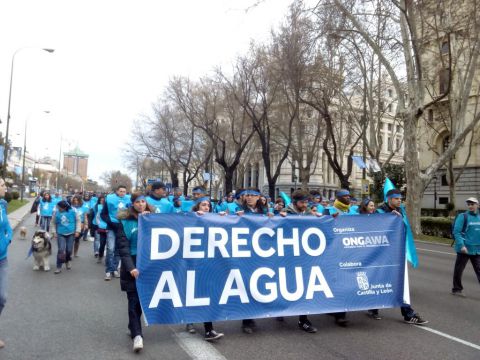 As we pass World Water Day 2015, there have already been a good number of articles in the international news about this year’s mobilisations calling for the Human Right to Water and Sanitation to be realised. Here are just a few of the highlights so far.

Clinton Ikechukwu Ezeigwe, of Nigerian End Water Poverty member Christian Fellowship & Care Foundation, set the tone in a powerful editorial piece for Inter Press Service news agency, which has been syndicated around the world and shared over 700 times on social media.

It’s fair to say that the Republic of Ireland’s massive wave of water-related protests gained some serious column inches. Among the large thousands assembling were at least of 20 groups directly affiliated to the World Walks. Elsewhere, Kenya’s Standard covered KEWASNET’s activities in Nairobi, with strong statistics driving the reasons to walk home.

In the Spanish-language media, Fundación Chile got plenty of attention for their events in Santiago and Viña del Mar – with coverage in El Cuidadano and Entorno Inteligente , among other media. There was “no turning back” in Mexico, as Sin Embargo covered a large coalition of civil society groups attacking new government water laws which they say undermine human rights. Spain’s engineers for human development ONGAWA made a media splash with their ‘big selfie’ in Madrid, including Europa Press and Ecodiario.

In the French-speaking media, Carbone Guinée’s political engagements in Conakry made the pages of L’express Guinée and Guinee News.

There have also been some video accounts of mobilisations. Fundación Chile’s walks were featured in a news package by HispanTV, while Rural Water Aid International in Ghana made its own compilation of Walk highlights – which was shared by charity news magazine Third Sector via LinkedIn.

We’re expecting much more of the coalition’s coverage to come through in the weeks after World Water Day, and we will be sharing the best on social media.

There will also be more blogs on the way, offering first-hand accounts of the local and national reasons for action on water and sanitation. For now, see what Jariah Bah from WASH-Net Sierra Leone has to say about the importance of WASH in post-Ebola planning.