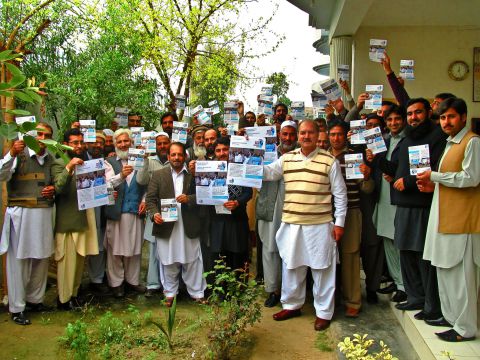 EWP member organisation, IRSP, has been recognised for its outstanding contribution to improving the lives of children in Pakistan.

Integrated Regional Support Program (IRSP), an EWP member which also coordinates Fresh Water Action Network – South Asia (FANSA) in Pakistan, has won a $50,000 prize for its work on water and sanitation in the country.

IRSP, which also collected thousands of signatures for the 1.8 million Keep Your Promises petition, was named runner-up in the Star Impact Award, WASH category, Asia-Pacific. As part of the prize package, IRSP will receive US$50,000 of unrestricted funding, US$10,000 in tailored consultancy and a package of media support.

The Stars Impact Awards recognises and rewards outstanding local organisations that are improving the lives of children in the countries with highest rates of under-five mortality. IRSP was selected from more than 160 competing organisations. IRSP director Shah Nasir Khisro received the award from former US President Bill Clinton at a ceremony in London this month.

IRSP works to empower and bring development to local communities in Khyber Pakhtunkhwa Province and Southern Punjab. It acts as a WASH resource centre and the leading agency in the implementation of two approaches to hygiene and sanitation in Pakistan: Community Led Total Sanitation (CLTS) and Menstrual Hygiene Management (MHM).

“Every day, these winners prove the power and potential of local responses to global challenges. I am inspired by their work and look forward to seeing the enormous impact they will surely achieve in the future,” said Clinton.